Below you can find out a little information about Mr. Berchtold 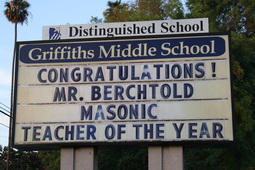 Mr. Berchtold has been teaching math at Griffiths Middle School since 2005.  During his tenure, he has taught Math 6, Math 6 Honors, Math 6 Core Support, and Algebra.  Mr. Berchtold is currently a full time teacher at GMS and is the Title 1 Coordinator.  Prior to becoming a teacher at GMS, he completed his student teaching at West Middle School and was employed as a manager at Albertsons.

Mr. Berchtold has Master's Degree in education from National University and a Bachelor of Science Degree in Computer Information Systems and Business Administration from the California State Polytechnic University of Pomona.  He currently holds a single subject teaching credential in math and introductory business.  He also holds a certificate of eligibility for an Administrative Services Credential. You will often see Mr. Berchtold filling in for the vice-principal at GMS.  Mr. Berchtold was also the Vice Principal for Sussman's Extended School Year during the summer of 2010.

Mr. Berchtold has been recognized over the last several years for his dedication and commitment to students.  In 2010, he received PTA's Very Special Person Award.  In 2011, he was nominated to receive PTA's Honorary Service Award.  In 2012, he was selected as Downey's Middle School Masonic Teacher of the Year!  Mr. Berchtold's dedication, enthusiasm, and commitment toward student learning is evident in everything he does.  His passion for technology is evident in his teaching and is always trying to find innovative ways to engage students.

Mr. Berchtold is married to his wife Jennifer who is a 5th grade teacher.  His daughter is currently 12 years old and in the seventh  grade.  His son is 9 years old and is 4th grade.  In Mr. Berchtold's free time, he enjoys spending time with his family, riding motorcycles, wake-boarding, playing tennis, and enjoying the great outdoors! Below, you can view pictures of Mr. Berchtold and his family.